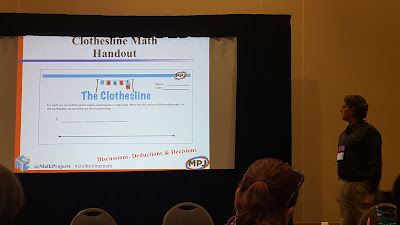 You know how there are some sessions you go into and you walk out thinking, "Wow, why didn't I ever know about this before?"
Yup. That was me at the CMC-South Conference at Chris Shore's session on #ClothesLineMath.

He challenged us to use what we learned within 2 weeks. I don't know if I'm within the timeframe, but it doesn't matter. Cuz I was excited. And I tried it.

In my classroom, we are learning that exponential functions grow at a faster rate than linear functions. What a great spot to use #ClothesLineMath!

First, I asked my math department friends to come visit me during periods 1, 3 and 5 so they can give me suggestions.
Then I came in super early to class to rearrange my room. 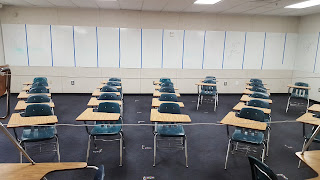 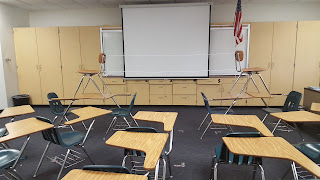 I have desks in groups of four for group work. The students face each other, not me. Today I wanted students to focus on the clothesline, so I set up the desks in an arc facing the front.
I haven't had my students face me all year, so when the students actually came in and sat looking at me, I felt satisfied. It felt like participation.

I went into  Chris Shore's website the evening before and practiced at home with my daughter, so I had plans to have students go on the board and work on their own number line in groups of 2. But I didn't implement that during my 1st and 3rd period cuz I was excited about the "perceived participation".

I didn't use fractions, decimals or negative numbers on this day. Just whole numbers. I was happy to see that the students who did participate used hand methods like Chris Shore mentioned in his session. 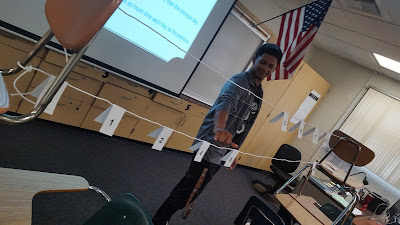 I used a word problem from my textbook(shown below). My students pointed out that soccer teams would never start with 1 minute of practice like it says in plan 2 of the question. I should have thought about the problem instead of only thinking about using #ClothesLineMath. Oh well. It was too late. 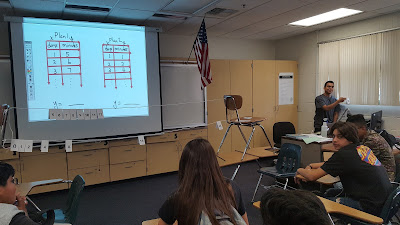 I felt satisfied with the lesson but was sad to see that students could not come up with an equation for the two plans.

For the remaining 5 to 10 minutes of class, students had to write down their observation and answer the question from the textbook in their notebook.

Then third period started and (yes!) my teacher friend Deatra Lee showed up to give me pointers. I also have a para-educator that period, which means I get an extra pair of eyes. Now that this is my second time doing the same lesson, the excitement of trying something new quickly faded and I started seeing what any normal person can see. Deatra kindly stayed after class and shared that she saw a few dominant personalities and they were actively participating, but others were not. I told her I had markers and cloths so students can work in groups on the board while I have other students come to the front to work on the clothesline, but I didn't implement it. What I did NOT tell her was that I really enjoyed having students face me and it made me FEEL like they were participating and learning. I was too embarrassed to share that. Deatra also suggested giving students time to talk to their elbow partners first then having them sharing out their observations to me. I was so glad that Deatra helped me see beyond my "perceived participation".

Of course I implemented her tips during fifth period. 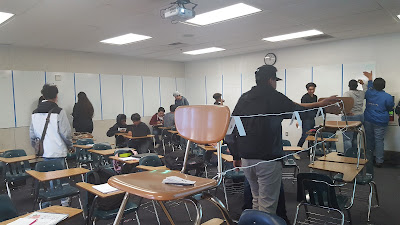 I saw a beautiful room during fifth period with kids up, around and loud. Because they were in groups of 2 to 4, I think they felt more comfortable coming to the front to place the numbers on the clothesline. 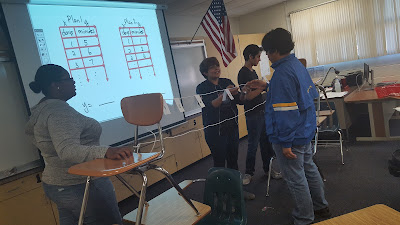 I'm not going to lie. My pictures look so much more beautiful than the actual lesson. But anyhow.
This was how my first attempt at #ClothesLineMath went. It was fun for me. It was different for the students. I felt bad that my first and third period students did not get the same interaction that fifth period students got. But now I know what to do if I use #ClothesLineMath again.

How are you using #ClothesLineMath in your classroom? I'd like to know.
Pleases visit Chris Shore's website and see what you want to do in your classroom. Then share it with Chris, but also share with me. Cuz we all wanna be better at our craft. Right?


Posted by MathPrincessC No comments: Links to this post