My Shot at Gamification During Summer 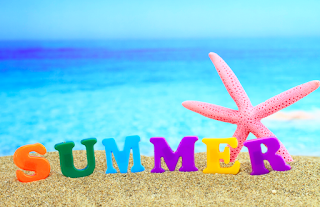 Summer is just a great time to try anything new, isn't it?

That is, if you are one of the fortunate ones who get to teach during the summer.

I've been thinking about gamification for a long time, but it seemed too intimidating.
Some people told me to start assigning XP and badges in place of grades and that would do the trick. Others made gamification too daunting. They said I need storylines and  great animation skills.

So guess what I did. Yup, I did gamification.

First, let me share what my 10 students in my summer session said about gamification.

They didn't like how it took me 24 hours to approve their quests. This means grading their quest so they can get their XP and badges. They wanted instant gratification. They didn't like that I would comment and return their quest instead of giving them partial XP for projects that did not meet the rubric.

At the end of the summer session, 9 students passed with an A or B and one student earned a D because he didn't earn enough XP, and received a 68 percent on his final. 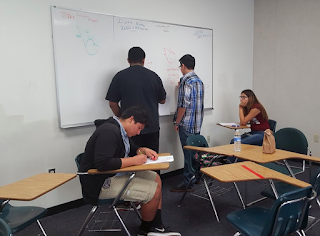 I realize I need to explain my grading system and the nature of the quests at this point.

Most of my quests are math projects.

Some require students to participate in #360math, or vertical non-permanent surface classroom, which means all students have to go to the whiteboards, write their name on top and solve problems I ask them to solve. I monitor them in the middle of the room and help them when I notice signs of struggle. As long as they participate, they earn their XP.

The quest that is worth the most XP ends up being traditional tests which are cumulative. I know, traditional tests suck, but I guess I'm still not that innovative. Here is the innovative part though. Students take the test and I grade them. Whatever their grade, they can't get their XP until they get 100 percent on the test. So how do they get 100 percent after they learn that they only scored 30 percent? They correct their test, then come see me individually to explain why they got it wrong the first time and how it's supposed to be solved. And of course, if there is no one around to help them correct their wrong question, they first get tutored from me, then they come back the next day to re-explain to me.

So as you can see, the whole class is set up so students actually learn and they earn XP. You either do it correctly and earn XP, or you don't do it correctly and you have to keep trying till you get it right. Students only stress out over XP. I tell them periodically how much XP they need to have by certain dates to ensure they pass my class. When the final comes, students should not be worried since I recycle questions from the previous tests, which were all cumulative anyway. I also add three or four questions that everyone can get correct such as, "Draw me a little picture to have Ms. Choi remember you by".

What I loved about gamification using 3D gamelab was that I can create quests that simply required student participation, while others required meeting content standard proficiency. All students had to do their work (quests) and in the end, they would automatically be set up to pass the final. What I hated about gamification was how I had no time for anything. I was constantly approving quests and constantly talking to students who were in different levels even though I had a set timeline on when to complete what.

On the last day of summer school, my students and I had a round table discussion on my system.
They shared all the things I shared above, but in addition to that, they thought that having one final at the end of the semester for a grade will be too long of a period for students to wait. My students told me that there will be many lazy students who will not accumulate enough XP throughout the semester and start complaining about my grading system at the end of the semester. To protect me, they said I should have a test at the end of each grading period and also assign grades based on how much XP they "should" have earned till that point in time. Yes, my students are super cute and try to protect me from other evil students. :)

They did tell me that it was "annoying" and "unfair" of me to hold off on approving their quest on traditional tests until they corrected all their wrong answers. They said, they were "totally okay" with a "C" on their test and I am "forcing" them to do better. I just took that comment as, "Ms. Choi, you are REALLY an awesome teacher".

Since it was the last day of school and I already told them their grades, they told me that board work was great sometimes, but on those days when they didn't want to work, they simply copied off their friends work to get their XP. But they do that with traditional classwork anyway, so I didn't really think too seriously about it. I just wanted to see everyone's work on the board so I can approach the ones who need help and provide it. 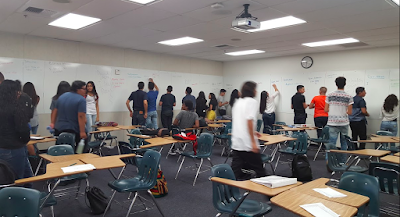 I tried 3D gamelab over the summer because it was about $120 per year for up to 175 students. Steven Isaacs, the presenter I met at ISTE2015, told me he uses that so I wanted to try it out. Another presenter from ISTE2015 told me Classcraft is cheaper. So I wanted to try that one during the regular semester. But this semester, our District made many changes to our schedule so now we have 7 periods instead of 6 and our awesome principal made some changes to the way we work in the math department. So right now, I am putting gamification aside.

I am still using the same grading system. But instead of XP, I just put in grades into gradebook everyday for everything they do. And it's either 100 points or nothing at all. It's a little different because students are not looking at how many XP they accumulate, but rather they check to see if they still have a 100 percent A. Other students who don't mind a B or a C simply don't submit their work since they are happy with a lower grade. So test corrections are not being done and student created videos are not being done as thoroughly compared to the summer when I used gamification. I really feel like I need to go back. But the pricing system with 3D Gamelab doesn't work for me since I have six classes and way more than 175 students.

If you are using a certain platform for gamification that is easy on my wallet and still really user-friendly, would you let me know about it?

Posted by Unknown No comments: