I didn't go to school today. My #StartOver students worked on Imagine math during both periods with the sub, I hope.

I was excited about today's Southwest Riverside County Think Tank meeting. One of the members, Toby, spoke very highly of Yale Wishnick, who was our speaker, so I wanted to see what I can get from him today.

Yale has a warm and kind aura about him. I felt comfortable in his presence. His topic was strength based teacher driven change. What a great topic. I was just about to get into his talk. But then he threw me off. This was his first slide. He told us to figure out what the letters stand for. 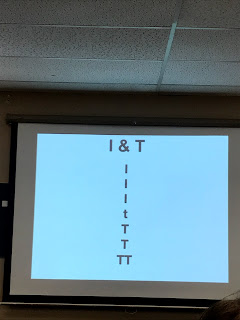 I was immediately stressed. He didn't even start his talk. And out of nowhere, we need to figure out what these letters stand for? I felt nervous. I wanted to go home. He told us to work in groups of 2 and lucky for me, I didn't have a partner. So I observed. For me, the I & T stood for I and Team. I noticed that the other teachers tried to come up with words that had to do with the theme of strength based learning and think tank, since our group is a think tank. It was 2 minutes. And the two minutes felt like it was forever. When Yale picked on someone to ask what they thought the I & T stood for, I was so relieved. This was the moment I totally sympathized with my restart students. Can you imagine their fear as I call out their name and demand that they tell me what they just heard? I don't know the approximately 15 people who are in the room with me and I definitely did not want to feel like the dummy in the group. For my students, what immediately follows when they don't answer me is the dreaded phone call home in class! I decided right at that moment that I should not punish my students like that in class any longer.

As soon as Yale told us that the I stood for "I am great because...", I was so relieved. Suddenly, he made us all finish that sentence. Then we all had to share it out! I have to tell you, it was hard to say in once sentence what I was great in and why. But we all did it. We laughed later when Yale told us that if he told us to write down what we need to improve on, we wouldn't have a problem and we'd write a long list. But when asked what we are good at, we were stumped. It was incredible how he made us write one sentence to make his point on how our society is run using a deficit model.

What I got from today's session was that if we focus on strengths, we will be energized and everything will work great. But the norm is to turn to the deficit model. The deficit model identifies what is wrong and attempts to fix it. That model is so exhausting because deficits are organic and it grows. Yale urged us to simply ask what we are doing well. He advised us to not even talk about what we're lacking. And from that point, keep going. He also said all the answers are in the room. All the right people are there. He also asked how we feel when we go to a meeting and one group wants things this way and the other group disagrees and wants things another way. We feel drained. But if we go to a meeting where everyone talks about what they are doing well and uses that to do something positive, how do we feel? We feel energized.  By the end of the day, I felt so grateful Yale showed up in my life.

After Yale left, our think tank wanted to discuss our direction. We decided to use Yale's strength based model and write one thing we're great at and use that as an anchor to propose which way we think the think tank should go. 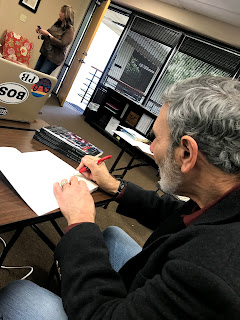 Yale gave us a copy of his book. I justly forced him to sign my copy. I asked that he write my name and a message before he signs my copy. He told me I was demanding. I took it as a compliment. I took a selfie with him because he doesn't know me at all, but I know me and a man who has such great thoughts has to be in the same picture as I. I am a leader since at least 4 other teachers demanded the same after they saw my move. I'm sure Yale enjoyed his author signing session thanks to my lead. I think great thinkers like him deserve moments of love and attention. 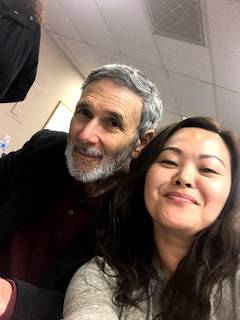 I feel grateful almost everyday these days. Why am I so lucky? I have such good people around me. I also learned that in this group, many teachers are implementing #20time in their classrooms. And this man Toby, he started a hydroponic garden at his school with the grant money he received from the CTA. Wow! And I secretly stalked Tech Fairy Michele Osinski then asked her for a selfie. I can't wait til I meet the think tank members again. I already feel like I'm going to be a better person because of today's session and the people I met. 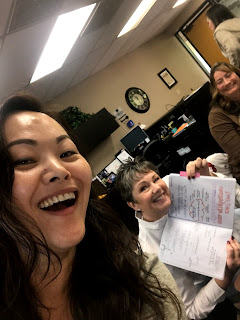