Over the break, I decided that Tuesdays will be my station rotation days.

Since this is our first week together, I wanted to do something that will gently ease my Introduction to Algebra 1 class into station rotations. So far all they know is that they are in groups of 6 and I call them stations.

But alas!
I didn't finish Jo Bolar's lesson yesterday. We watched the video, took notes and discussed them, but I didn't get to the dot card activity.

So I had a dilemma. Do I skip the dot card activity and have them practice station rotations or do I finish what I planned for day 1.

I decided to finish day 1.

So I used this lesson plan from youcubed. 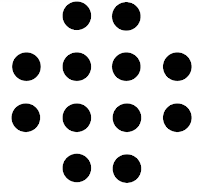 and the students tell you how many they saw and how they grouped them to get to their conclusion.

My only problem was that I didn't think deeply about how I am going to show the dots to my students quickly for one second. I turned off my projector, got the image on screen, then opened my calendar then turned on my projector. When it was bright enough, I opened the tab with the image for a second then went back to the calendar. That process was a waste of time. (Don't worry now. I didn't repeat this sad procedure again with my second group of students. I upgraded this little part of the procedure.) The activity on the other hand, went very well.

This is how my students saw the above dots. 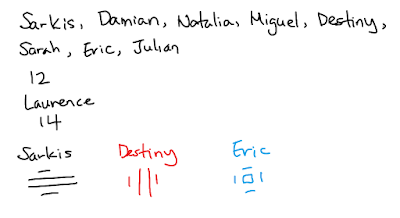 I was very excited that Laurence gave me a different number but disappointed when he didn't explain to me how he saw them. I told him that when I first tried this exercise I saw 16 dots and not 12. I told him that I only saw a box of 4 rows and 4 columns and didn't notice the four corners were blank. Then I told him it's ok to have a different answer. Because the video from yesterday said that the moment we are aware that we made a mistake, a brain wave fires through the synapses and makes us smarter. I hope Laurence feels empowered to share more later today.

Again, my students had to write minimum 4 sentences on the discussion question and reply to one classmate.

I asked, "What did you learn from this dot card number talk?".

Here is one answer I liked.

With my second group of students, I started the activity by letting them know that I got my number of dots wrong the first time I tried the activity. That freed up the students to share varied answers. They mainly focused on explaining their visual representation, which was what I wanted. I liked the way I ran the class with my second group. 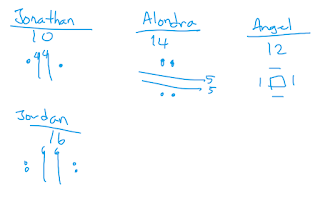 So the next period is when I finally get to share Dot Explosions by James Tanton, my current star.  When I watched his video series over the winter break, the lesson plan was simple. Have students watch the video, then I give them questions to solve and they all go to the boards. #360math to the rescue!

But that was before my first group of students walked through the classroom door. 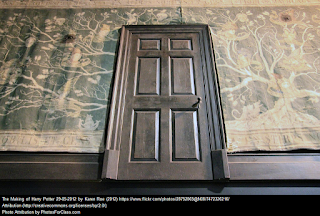 I had to first make sure they know how to go to Canvas to get to the link. Then I had to explain how the lessons are numbered 1.1, 1.2, 1.3 etc. Then I had to re-explain how to use the notebook since many students didn't make it to my class yesterday. Today was their first day.

Then I played the 20 second video. I assumed they got it. I asked a few students what James said in the video. Three students gave me something.
Then I moved on to the next video. That one was 2 minutes 40 seconds long. Once I played the whole video, I expected the students to know how to use the 1<- 2 machine. I was so wrong.

I started writing on the board, explaining what James said all over again.
It was ugly. The two videos took all 57 minutes of class today.

So of course when my second group of students walked in for 7th period, I made changes.

Even for the 20 second video, I paused it every 6 seconds or so and made sure students in each of the stations understood what James said. 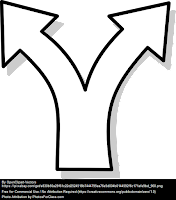 During the 2 minute 40 second video, a student made a mistake and said "left" instead of "right". He said, "two dots explode on the left and one dot shows up on the right". Once I thanked the child for answering, I told him he was very close, but it's the dots on the right exploding and the dot on the left showing up. The whole class laughed at the child.

I wiped away my smile. I made a very disappointed face.

Then I asked the whole class, "Why are you guys laughing? Did you all know exactly what was happening in the video? What you are forgetting right now is that his brain cell just grew from his mistake while yours didn't."

The class quickly quietened down as if cold water suddenly drenched them.

The lesson with my 7th period was a success. But it still took the whole 57 minutes.

You can bet that almost everyone volunteered information after that scary silence. 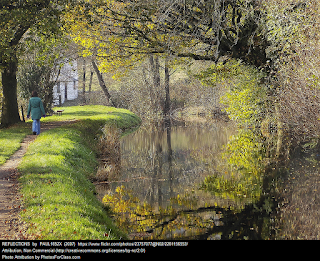 What I learned today is that students need to feel safe to participate. And the best way to make them feel safe is by letting them know of the mistakes I make myself. And to advocate for students who are trying, but didn't get them quite right.

I know. This is probably common sense to everyone. But you see, I was never this intentional about making my students feel safe until two days ago.

I also learned that a 15-minute lesson can always suddenly turn into a 57-minute lesson. And that my lesson plan can suddenly change in class.

Again, I know this is common sense. But I never recorded anything in the past so I think I never really thought about it intentionally.

I feel happy and satisfied.